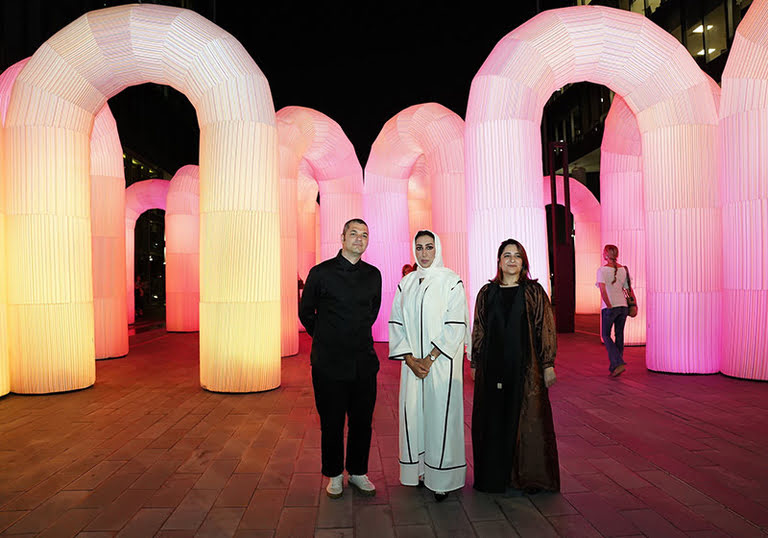 Dubai Design District (d3), a global hub of art, design, and creativity and a member of TECOM Group PJSC, and Dubai Festivals & Retail Establishment (DFRE), last night officially unveiled Sky Castle, a dreamy, multi-sensory sound and light artwork by the multi-award-winning Australian-based art and technology company ENESS. The work was revealed in the presence of the artist, Nimrod Weis, alongside the d3 team and representatives from DFRE.

The large-scale, interactive, colourful installation is presented in collaboration with DFRE’s Dubai Lights activation, part of Dubai Shopping Festival, and as the centrepiece of d3’s Winter Season, which runs from mid-December to the end of January and which aligns with the third edition of the “World’s Coolest Winter” campaign launched by His Highness Sheikh Mohammed bin Rashid Al Maktoum, Vice President, Prime Minister and Ruler of Dubai. Sky Castle is making its debut in the Middle East, with the installation’s cluster of inflatable arches spanning in a colourful symphony across the core of d3.

Visitors can interact with the striking installation. As they walk through the arches of the inflatable artwork, their movement powers and progresses a melodic xylophone soundscape, stimulating colour changes in each arch. Light, colour and music have been orchestrated to evoke the feelings of joy and hope that rainbows bring after every storm. As more people join the journey as well, the contemporary musical score crescendos creating a lush, orchestral piece that is different every evening as the installation responds to crowd flow and fluctuations.

Khadija Al Bastaki, Vice President of Dubai Design District (d3), said: “This breath-taking, colourful light and sound experience will be the centrepiece of our winter season at d3 and we are honoured to collaborate with Dubai Festivals and Retail Establishment on their beautiful Dubai Lights, part of Dubai Shopping Festival activation as well, and align with the UAE’s “World’s Coolest Winter” campaign. With its impressive scale and multi-sensory elements, Sky Castle is the epitome of creativity and rethinking the regular and it is a natural fit for all we do as the region’s leading hub for the creative community.  We look forward to it stimulating conversation and bringing people together, all whilst reaffirming Dubai’s status as a global creative hub.”

Ahmed Al Khaja, CEO of Dubai Festivals and Retail Establishment, said: “The 28th edition of Dubai Shopping Festival features seven packed weeks of incredible experiences, events, entertainment, arts and culture. With this, the second edition of Dubai Lights as part of DSF, we have created a stunning showpiece of art installations from leading global talent in destinations across the city – including here at d3, the hub of design and creativity. Dubai is known as an incubator of talent and a catalyst for the creative economy, and the success and growth of Dubai Lights demonstrates our great city’s commitment to profiling and supporting a cultural and creative ecosystem. Working with our partners at d3 for the first time this year is indicative of the ways in which DSF, after 28 editions, continues to grow and evolve, and reach new destinations and new audiences across the city.”

Talking of the work’s debut in the Middle East, Nimrod Weis of ENESS also adds: "It is meaningful to us to share Sky Castle's message of joy and light to the city of Dubai as part of Dubai Lights because at the heart of all ENESS work is joyful, cross-generational connection. In this way we view ourselves as Happiness Architects who seek to add to the wellness of cities and public spaces by creating sculptures that have a positive effect on people's wellbeing - lifting them out of their present circumstances, whatever that may be - to touch their hearts and souls.”
The Sky Castle story was developed during lockdown to express freedom from isolation and positive clear skies that come after difficult times.  It was first unveiled in 2020 in Fed Square in Melbourne, Australia as the city came out of its third lockdown due to the pandemic. Later that year, the work travelled to Shenzhen, China and has since delighted visitors across Australia and internationally in Hong Kong, Belgium and Canada. This winter marks its Middle East debut.

In terms of design, Sky Castle is an exploration into inflatables as temporary architecture in public space. ENESS Studio is a multi-award-winning art and technology studio, led by artist and founder Nimrod Weis.  The studio has designed ground-breaking experiences for cultural institutions around the world for the last 20 years, including art galleries, museums and performing arts complexes, events and festivals. It is distinguished by a multidisciplinary team of creatives which includes artists, musicians, software engineers, industrial designers and a writer.

The Sky Castle installation epitomises d3's role as the region’s leading creative hub, bringing a diverse and influential creative offering and mix to the UAE and region. Art forms a crucial part of d3's ecosystem, alongside design, fashion, and architecture.

The d3 Winter Season will also feature an array of other creative, festive and health and wellness activations and opportunities over the six-week period (15 December-29 January).  These will include: